With an area of 603,628 km² and a coastline of almost 2,800 km on the Black Sea to the south, the eastern European country of Ukraine is the largest country wholly in Europe, and lies between latitudes 44° and 53° N, and longitudes 22° and 41° E. It shares a border with Belarus, Hungary, Moldova, Poland, Romania, Russia and Slovakia, strategically situated between the EU, Russia and the Caucasus.

The Carpathian Mountains are found in the extreme west, and a smaller mountain range is in the Crimean Peninsula in the south. However, most of Ukraine consists of fertile plains (steppes) and plateaux, with major rivers flowing south into the Black Sea. These plains are some of Europe's best agricultural land. Indeed, Ukraine has one-third of the world's richest soil, the chernozеm, known as the "black earth". It is estimated that Ukraine, if fully cultivated to Western standards, could feed a fifth of the world's population, increasing its agricultural production by over 500%, to become the world's leading grain exporter and a leading producer of many other agricultural products.

Ukraine has a temperate continental climate with a Mediterranean climate on the Black Sea coast. Precipitation is disproportionately distributed, highest in the west and north, and less in the east and southeast. Winters vary from cool along the Black Sea to cold further inland; summers are warm across most of the country, and hot in the south. 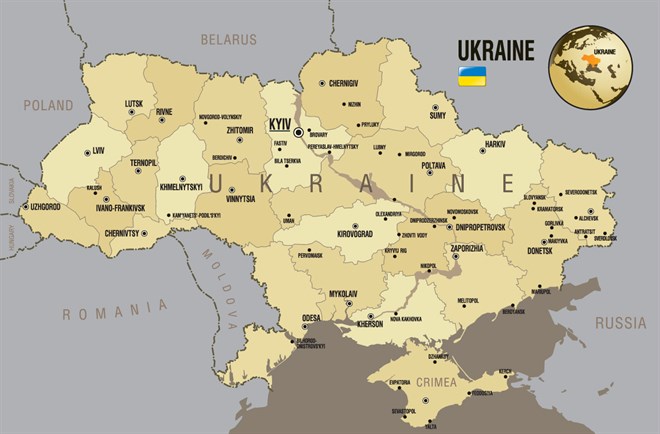 Ukraine has significant economic potential as a result of:

It is going through a difficult political transition following Russia’s illegal annexation of the Crimean Peninsula and the ‘Operation of the United Forces’ in Eastern Ukraine.

However, despite the difficult political and economic climate, Ukraine continues to offer opportunities in a broad range of sectors. Many of these involve co-operation with Ukrainian companies and authorities, and require Western financial investment.

Contact a Department for International Trade (DIT) export adviser at: https://www.great.gov.uk/contact/triage/location/ for a free consultation if you are interested in exporting to Ukraine.

Prominent Ukrainian businessman and politician, Petro Poroshenko was elected President of Ukraine in May 2014. His election followed the ouster of former President Yanukovych as a result of a violent crackdown on the “Euro-Maidan” demonstrations of 2013/14. These demonstrations had been triggered by Yanukovych’s decision not to sign the EU Association Agreement in November 2013, but soon broadened their focus to include challenging corruption and lack of transparency.

In October 2014, pro-EU political forces formed a ruling coalition, declaring their commitment to conduct comprehensive political and economic reforms. Parliament voted to support a new government headed by Prime Minister Arseniy Yatsenyuk in early December 2014. In April 2016, Yatsenyuk was replaced as Prime Minister by (former Speaker) Volodymyr Groysman; several Cabinet Ministers also changed at this time. The majority coalition in Ukraine’s Parliament (Rada) continues to include the Bloc Petro Poroshenko and Yatsenyuk’s People’s Front but other parties that had been part of the coalition in 2014 are now in opposition. The reduced and unstable majority has hampered the government’s ability to pass new legislation.

Ukrainian and international electoral watchdogs, including OSCE/ODIHR observers, praised Ukraine’s local elections held on 25th October 2015 for their progress towards free and fair political competition. According to the OSCE conclusions, the 2015 local elections were competitive and well organised, and showed respect for the democratic process, although certain areas for improvement to enhance public confidence were also identified.

Combating corruption, reforming Ukraine’s judiciary as well as decentralisation, deregulation and de-oligarchisation remain among the key priorities for Ukraine’s Government. Ukraine’s civil society plays an active role in advocating for these reforms and others, including electoral reform. The international donor community is playing an important part in supporting the reform process. The UK has a significant bilateral assistance programme focused on the areas of good-governance, humanitarian, defence support and energy. The British Embassy Kyiv is also working closely with the EU, World Bank, EBRD and other IFIs and bilateral donors active in Ukraine.

On 1st January 2016, the Deep and Comprehensive Free Trade Area (DCFTA) – as part of the Association Agreement between the EU and Ukraine signed in June 2014 – was provisionally applied. (The EU had unilaterally applied year one of the DCFTA, the “Autonomous Trade Measures”, in 2015.) The rest of the Association Agreement had already been in force since November 2014. The provisional application of the DCFTA is a significant milestone in the EU-Ukraine relationship, offering new economic benefits to both sides. Ukrainian businesses receive stable and predictable preferential access to the largest market in the world with 500 million customers, while EU businesses benefit from easier access to the Ukrainian market and build new relationships with Ukrainian partners. This is also to the benefit of Ukrainian citizens, driving up the quality of domestic products and providing better access to high quality imports. Increased competition and the lowering of import tariffs should lead to lower prices.

Through its ambitious goals of approximation to EU legislation in areas such as competition, government procurement, and protection of Intellectual Property Rights, the agreement will contribute to the modernisation and diversification of the Ukrainian economy and will create additional incentives for reform, notably in the fight against corruption. The DCFTA thus offers an opportunity to Ukraine to improve its business climate, attract foreign investment, and further integrate with the world economy. The DCFTA is foreseen to be implemented over several years, allowing gradual alignment of legislation and tariffs and time for all affected stakeholders to adjust.

Russia illegally annexed Crimea in March 2014, following a ‘referendum’ on the peninsula which violated Ukrainian law. Since then there has been a severe deterioration of the human rights situation, access issues and a serious economic decline.

The UK Government’s position on Crimea:

Check with the DIT Ukraine team in Kyiv at: https://www.gov.uk/world/organisations/department-for-international-trade-ukraine#contact-us for up-to-date information and advice on the business risks in Crimea.

Ukraine has a broad (if ageing) industrial base which is strong in ferrous metals and chemicals. This includes much of the former Union of Soviet Socialist Republic’s (USSR) space and rocket industry and a well-developed defence and security sector.

Ukraine is a major producer of agricultural products such as:

The EU accounts for about 40% of Ukraine’s trade, while CIS countries account for about 20%. Ukraine has a major ferrous metal industry, producing cast iron, steel and steel pipe, and its chemical industry produces coke, mineral fertilisers, and sulphuric acid. Ukraine has a broad industrial base, including much of the former USSR’s space and rocket industry.

Ukraine is a member of the European Bank for Reconstruction and Development (EBRD) and joined the World Trade Organization (WTO) in May 2008.

Ukraine is also the third-largest International Finance Corporation (IFC) exposure in the region after Turkey and Russia, and is the 12th largest IFC exposure globally, accounting for about 10% of IFC’s total outstanding portfolio.

The UK is the fourth largest investor in Ukraine after Cyprus, Netherlands and Russia (as of 2017). There are over 150 well-established UK companies in Ukraine, with many more brands present. Major UK companies in the market include BP, Shell, GSK, AstraZeneca, BAT, Imperial Tobacco, Mott MacDonald, Crown Agents, Next, and Marks & Spencer.

Benefits for UK businesses exporting to Ukraine include:

Contact a DIT export adviser at: https://www.great.gov.uk/contact/triage/location/ for a free consultation if you are interested in exporting to Ukraine.